In the weeks following the 2011 Boston Marathon, a random twist of fate brought the good people of the Gatorade Sports Science Institute (GSSI) to me and I was invited to participate in nutrition and endurance testing while they were in NYC for the 2011 NFL Draft.  My first thought was, “this can’t be for real, why the hell would I be chosen for such a thing?!”  But it was real and after sitting there and staring at the invitation I went ahead and accepted.  In my mind I simply thought, “how often would I have the opportunity to go through the same tests that professional athletes go through?”  Secretly, all I wanted to know was if I would sweat a Gatorade color while in black-and-white!!!

The testing was part of the GSSI’s efforts to help endurance athletes gain a better understanding of how their bodies work and provide ways to improve their athletic performance via nutrition and hydration.  It consisted of a Body Composition (BOD POD) assessment, the Wingate bike test, 1-mile run estimating VO2, and a fueling survey with a sports scientist.  When I got the sheet describing all of the tests I was ridiculously excited and then mortified to be put under the microscope a little bit, but once I was told one last little surprise bit of information all that apprehension went away.  I was told that in addition to the testing I was also going to have the opportunity to sit and pick the brain of U.S. Olympian and long distance runner Dathan Ritzenhein, which just so happens to be among my favorite U.S. distance runners. Too cool!
Now, to give you a little perspective on how crazy fast this all happened, I received the email at 3:22 pm that Tuesday and I essentially had 24-hours to pull together all of the medical releases and doctors signatures so that they would even let me participate, which turned out to be a rather daunting task with work and such an incredibly tight window to get everything in to the powers that be.  I’m amazed that I managed to pull it all together in time, but thanks to the help of a few friends and some shameless ignoring of the work on my desk I was all systems go.

Thursday rolls around and I’m basically on the edge of my seat until the clock rings time-to-go-o’clock and I bolt out of the office and head to midtown west.  It’s just my luck that while I am en route the sky opens up and the heavens crack in dramatic and biblical fashion.  The streets are flooded and the rain is coming down in sheets.   Regardless of the inclement conditions I get my sorry butt there and I go from excited to absolutely mortified and intimidated by the scene once I walk through the door.  I know most of you have seen the commercials during almost every sport on TV with the treadmill, bike and all the rest set up in a white room with lab scientists around … well, this was staged EXACTLY like that and I quickly descended into the pit of my stomach. 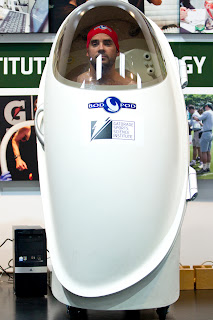 The BOD POD:  This was the first test and perhaps the most embarrassing.  This test is designed to determine your body composition, the ratio of lean (muscle) mass to fat mass.  First of all you are asked to tear down to just compression shorts and are then weighed, which I was a little self-conscious about.  I found out I was 190 pounds, which was news to me!  I hadn’t weighed myself in probably two or three years and I never thought I was that heavy, but I hadn’t done anything than eat since Boston, so it kind of made sense.  From there you go into the BOD POD in just the compression shorts and this really amusing red swim cap.  Now, the BOD POD itself looks a lot like a giant egg with a window, or Dr. Evil’s escape pod, or the chamber in The Fly that creates the Brundle Fly!  Very “ground control to Major Tom”.  You simply sit inside the POD silently, they press a few buttons and BAM it’s done!  If you’re claustrophobic it probably isn’t that comfortable, but all in a painless experience that provided me with some interesting information.  I was hoping for a little gamma radiation experiment and to turn green and jacked when I get mad, but alas it was not to be.  What I did learn: I was in the “Moderately Lean” category with a percent body fat of 16.5. 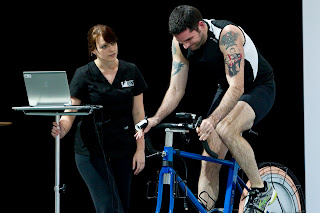 The Wingate:  Next up was the Wingate stationary bike test, which is designed to measure anaerobic capacity, power and fatigue; the energy system responsible for quick bursts of energy such as those used during interval training.  Basically what you did for this test was climb onto this special stationary bike and are then asked to build up your cadence until you are at your maximum output at which point they count down from ten and throw a load of resistance on and you are supposed to continue to “sprint” as fast as you can with that load on for 30-seconds.  Now, when they told me a “load” I thought a really big steep hill, well, I was wrong.  This was basically like pedaling at full speed on a flat and then being thrown onto the steepest slopes of Everest and being told to maintain that cadence and pace!  It.  Was.  Ridiculous!  Seriously, this test should be called “the Emasculator,” because there is no way you feel like any sort of athlete at all, let alone in shape, by the time you are done with this one.  So, I was cranking right along, the lab tech called out the 10-second count, I pushed to maximum warp, and then WHAM they the load on and I was immediately put in my place athletically.  The only thought running through my head was the same that runs through my head whenever I’m having a bad run, “just do NOT stop turning your feet over!”  I managed to fight and push my way through the duration, but only just barely, and the techs said that I did a lot better than most of the others that had come through did, which I took as them just being nice, but who can say?  It was incredibly tough yet interesting as I spun my legs loose and they showed me the computer data from the test.  The results were as follows: Peak Power = 1,413 Watts (W), Fatigue Index = 60.44%, Anaerobic Capacity = 9.7 W/kg. 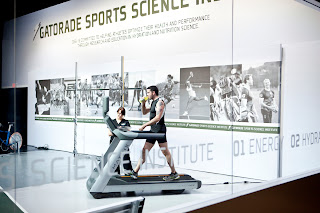 1-Mile Sub-Maximal Treadmill Run:  So, after the humbling of the Wingate test I had the opportunity to redeem myself running on the treadmill, something I loathe doing, but at least it was something I know I can hold my own at.  This test sub-maximally estimates your aerobic capacity (VO2 Max), the energy system allowing you to continue activity for a prolonged period, as well as also factoring into how well you recover between bouts of exercise.   Here I was simply asked to put on a heart rate monitor and run a mile at a sustained comfortable pace, which was a 7:25 pace.  Funny enough, there wasn’t much more to this test than that.  I was somewhere in the 95th percentile (54.35 mL/kg/min). 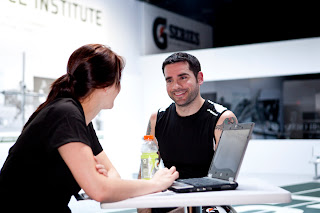 Fuel Survey:  Lastly, I sat with one of the technicians and went through a myriad of questions regarding my fuel intake before, during and after my workouts in an effort to assess whether I was fueling properly to achieve maximum performance.  I found this to be one of the most interesting aspects of the testing, because I felt like I fueled well during training, but I only scored 13/30.  The major reason for my score being so low was that I didn’t fuel heading into my workouts.  For my morning workouts I generally just rolled out of bed and got them done without an fuel intake and it was the same for my evening workouts, but my saving grace was that I did fuel up within 30-minutes of completing my workouts with carbs and protein (thank you Athletes HoneyMilk & HoneyStinger). Furthermore, I redeemed myself with the fact that I am good about hydrating, which they also tested that morning courtesy of a urine sample.  I was a little shocked by my low score, but it was great to hear their suggestions and I also appreciated the fact that they weren’t trying to sell me on the new Gatorade Pro Series. 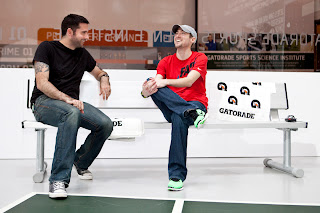 Once the testing was finished I had the pleasure of sitting with and talking to Dathan Ritzenhein, whom I’ve watched race on a number of occasions, but never did I realize how small he is or, probably more appropriately, how large I am by comparison.  I mean seriously, I look like I am superimposed or photoshopped into the picture of the two of us … I truly am Sasquatchian ... call me GIGANTOR!!!!  Anyway, while I sat there with him we talked about some of the different workouts him and his coach use to get him ready to race, discussing the merits of the track, shorter high intensity workouts, and the idea that “mileage is King”.  We also talked about the Olympic trials in Houston next year and how we both think that having the men’s and women’s trials on the same day sort of cheapen the experience.  The last Olympic trials were held at the New York and Boston marathons giving each gender their moment in the sun, so to speak.  I was extremely pleased at how down to earth Dathan was and the ease to with we spoke.   It was refreshing and a moment in time that I will definitely cherish.
I have to thank the Gatorade Sports Science Institute for this amazing opportunity to undergo the rigorous testing processes that professional athletes go through for assessing their endurance and nutrition.  It was an incredibly enlightening and unforgettable experience, so thank you!!  Since that time I’ve experimented with what I learned and have had fantastic results, most noticeably at the Reach the Beach Relay – Massachusetts.  I feel like I now have a much more solid grasp of my fueling and hydration situation and will continue to fine-tune it over the summer heading into the fall marathon season.
Posted by SpeedySasquatch at Sunday, June 05, 2011

What an great opportunity, and fun(ish) experience for you. Sounds like you got a lot out of it, even if you didn't sweat in any colors.

I love those pics too! Really interesting data, for us data geeks!

this sounds like an absolutely incredible experience! Thanks for sharing!

Im jealous! I love all of the Sports Science stuff! It is really cool and interesting. Nice how you scored in 95th percentile on the hamster wheel!

That so cool Josh! I would love to have that experience. Thanks for the HoneyMilk shout out! Lee and I definitely end our work outs with AHM. Lately we have both been on the coconut water kick and have ordered massive amounts of Zico in our favorite flavors, mango and chocolate. Please let us know how your hydration situation pans out and what you use prior to working out!

SpeedySasquatch
A freakishly fuzzy and fleet-footed forest dweller transplanted in New York City where he is now a runner, the founder & coach of Team Sasquatch, and soon-to-be triathlete looking to help inspire others to achieve their goals.

For more information or questions about training with Team Sasquatch, please contact me at SpeedySasquatch@gmail.com